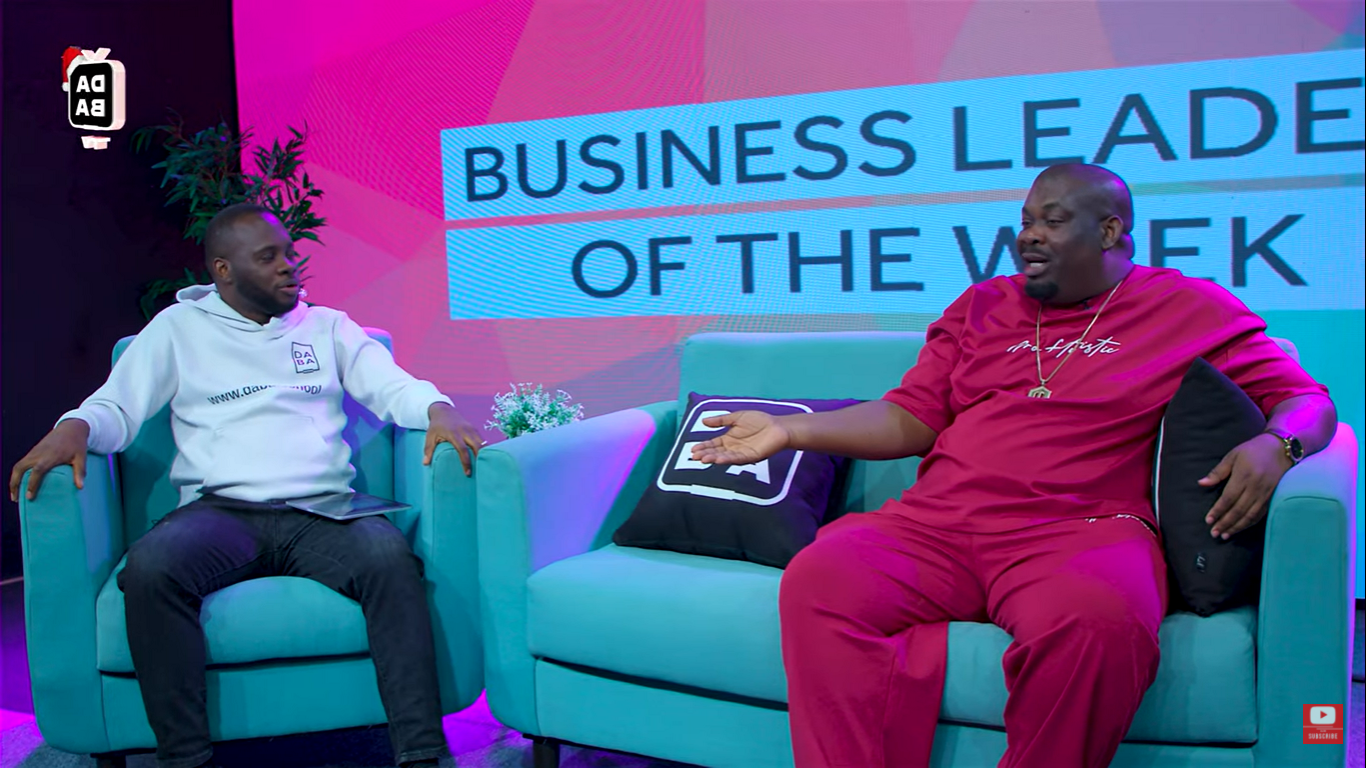 Before showing a listener their most played song for 2021 on Spotify Wrapped, an introductory text reads: While everyone was trying to figure out what NFTs were, you had one song repeat; but this was not the case for Don Jazzy, who not only figured out NFTs in 2021 but made money from them whilst still activating our vibes on vibes and giving us hit jams to bounce to.

Last week’s episode of DABA Business Leader of the Week saw the ace music producer share his crypto story with Chris Ani, the CEO of DABA, in the cool ambience of DABA Studios.

This story began in 2020 when a follower sent him a DM on Instagram asking Don Jazzy to promote his Forex academy to his followers. This follower wanted to offer others the opportunity to take advantage of the lockdown and make money online from their homes. But Don Jazzy turned down this request.

Speaking to Chris, Don Jazzy said, “I don’t like to tell my fans to pay money anywhere. I’d rather give my fans money; that’s how I prefer to run my own page.” However, he offered to attend the academy so he could also learn. This marked his foray into trading. Specifically, forex trading. He wanted nothing to do with crypto trading.

Like most people, Don Jazzy was tethered to the scepticism that surrounded crypto acceptance and adoption. “Before, anytime I hear Bitcoin, Ethereum, I no de wan hear. . . I de think say na wetin dem de take use go buy gun for dark web,” he said. This scepticism heightened when Bitcoin crashed to around $4,000 in March 2020 (thanks and no thanks to Covid). And like a Chelsea fan watching from the sidelines, anticipating another Manchester United loss, the Don observed Bitcoin.

But Bitcoin proved him and the world wrong, as was its wont. From $4,000 in March, it doubled within three months, hitting $8,000 in June. At this point, Don Jazzy’s scepticism wore off a bit, allowing him to buy some BTC at $8,000. He held his investment till $20,000, then, fearing it would crash at that price, he became awash again with doubt and sold.

But the digital gold did not crash, instead it rode its way to $50,000. And as if sending a taunting message to its naysayers, Bitcoin even crossed the $60,000 mark in March 2021, exactly a year after it crashed in 2020. This message was well received by Don Jazzy for his doubt gave way to belief and regret. Belief in cryptocurrency and its perpetuity; regret in the fact that he sold his Bitcoin $30,000 to $40,000 too early.

So when the NFT buzz rent the internet, he got into it though he understood nothing about it. His friend, Osinachi, an NFT artist, had asked him to produce a 20-second beat that would play alongside three of Osinachi’s artworks.

“We decided to sell on Nifty Gateway,” Don Jazzy said. “We opened a Discord channel. It was just like marketing something. I saw it as marketing a single.”

He took these steps curious as to who would buy the art. And on the day of the auction, his curiosity was satisfied beyond measure: the artwork sold for $300,000 within 10 minutes. Don was dumbfounded.

“I said, ‘Hold on, what’s going on?’ I know how many CDs we no go need to sell, how many streams we go need get before we go get this bar we just see like this in 10 minutes,” Don told an excited Chris.

This experience cemented his belief in cryptocurrency and blockchain technology; a belief that has made him decide to go the whole nine yards in the crypto space. The other day he showed us his NFT collections. Also, besides holding Bitcoin and Ethereum, he is also committed to investing in solid African projects, top on the list are Wakanda Inu and CakeTools.

Don Jazzy’s Mavin Records is home to a number of African stars including Rema, Ayra Starr, Ladipoe, and Johnny Drille. Now, with his entrance into the crypto space, he is looking at unifying the Nigerian music industry and the crypto industry. One way he plans to do this is by activating his artistes with their own tokens. Like having fan tokens for musicians. (Imagine having a Ladipoe token ($LDP) or an Ayra Starr token ($AYR).) The aim is to get fans to bet early on their favourite (up-and-coming) artistes and make money from these tokens as these artistes become (inter)national stars.

Don Jazzy is a full player in the crypto space and has people like Chris Ani to thank for it who has guided him into making right financial decisions. If not for Chris Ani. he would have bought Squid Game, the token, thinking it would be as successful as Squid Game, the movie.

Because of his newfound love for crypto, Don Jazzy sounded a note of warning to everyone: “Nobody should call me producer again. From now, I am NFT master, crypto Mbappe.” He laughed in that rich, raspy baritone we’ve come to love.

Click here to watch the full interview and see what Don Jazzy had to say about the music business in Nigeria, his experience as Mavin’s boss for almost a decade, and what he thinks about Rihanna’s pregnancy.