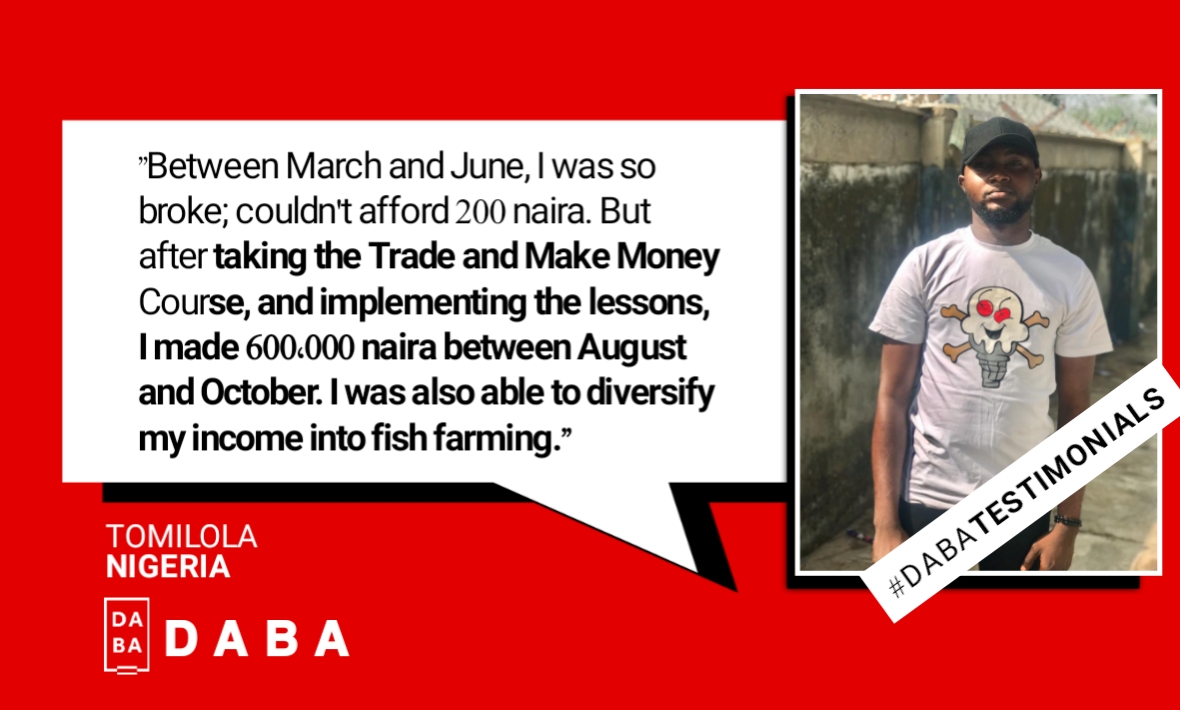 Tomilola’s Financial Transformation: How The Trade and Make Money Course Changed His Story

Many testimonies abound from The Money Code Conference (TMC) 2020, but for Tomilola, it was TMC 2019 that steered him towards the road to financial freedom.

Tomilola, a final year student of Civil Engineering, had always wanted to be in the crypto space since 2018, but raising capital was a challenge. In August 2019, he was able to raise some money which he channeled into an investment circle with a one-year time frame. He had just returned from his IT and was fully back to school. He didn’t think he could combine crypto trading with his academics, so he opted for the investment option instead of learning the skills of crypto trading. However, everything changed after listening to Chris Ani at the conference.

“During the conference,” he narrates to the DABA team, “I listened to Chris Ani’s session and my mentality changed. I understood that one has to get things done without finding a suitable excuse for not getting things done. Then I made a decision within me that before the end of the first quarter of 2020, I would pay for the crypto trading course and start learning no matter what.” And that was exactly what he did. He emptied his bank account to pay for the Trade and Make Money Course because he didn’t want to miss the discount. This was in March.

It took Tomilola two months to start implementing what he had learnt from the course because he didn’t have the capital to begin with. However, knowing that he had to put his knowledge to test, he funded his Binance wallet with $9 and started trading. Within a week, his $9 portfolio grew to $25.

Excited, he decided to start OTC trading using the strategies in Chris Ani’s Crypto Money Bundle. He waited for two weeks before he could close his first deal, of which he made 100,000 naira in profit. As that was going on, his $9 capital in Binance had grown to $58. He used 90,000 naira from his OTC trading profit to increase his capital in Binance. Between August and October, he made at least 600,000 naira from trading on the exchange. This is besides the profits he made from his OTC trades.

By trading crypto, Tomilola now has a fish farm. He is also looking at investing in real estate — and he cannot wait for DABA’s real estate course launch.

Tomilola’s story embodies the fact that mental liberation precedes financial freedom. This is why he says:

“People need to understand that nobody will make their dreams come true except them. People need to start taking responsibility and be intentional about what they want and what they want to do. It is a thing to buy a course and it’s another thing to put in all the work required. And that is why you must clearly define what you want. You must not do things because you see others doing it.”

He goes ahead to share a story of a time he asked Chris if he could still buy a particular coin Chris had mentioned on Twitter, and Chris replied him: “The kind of question I don’t answer.” Tomilola says he felt so bad, but it taught him that he has the sole responsibility of making his decisions, not just in the crypto niche, but in life generally. Since then, he has learnt to take responsibility for his actions. He advises that “whatever you want to do just get on with it no matter how small you’re starting, what’s more important is that you have started.”

Tomilola has said it all. The most important thing is getting started. So we've specifically held a spot in the Trade and Make Money Course for you on daba.school. Click the link. Enroll for a course. And yours might just be the next testimonial we will share.

The Who, What and Why of UI/UX?

The Story Behind The World’s Top 10 Affiliate Marketers

A New Year: 7 Resolutions You Can Stick To