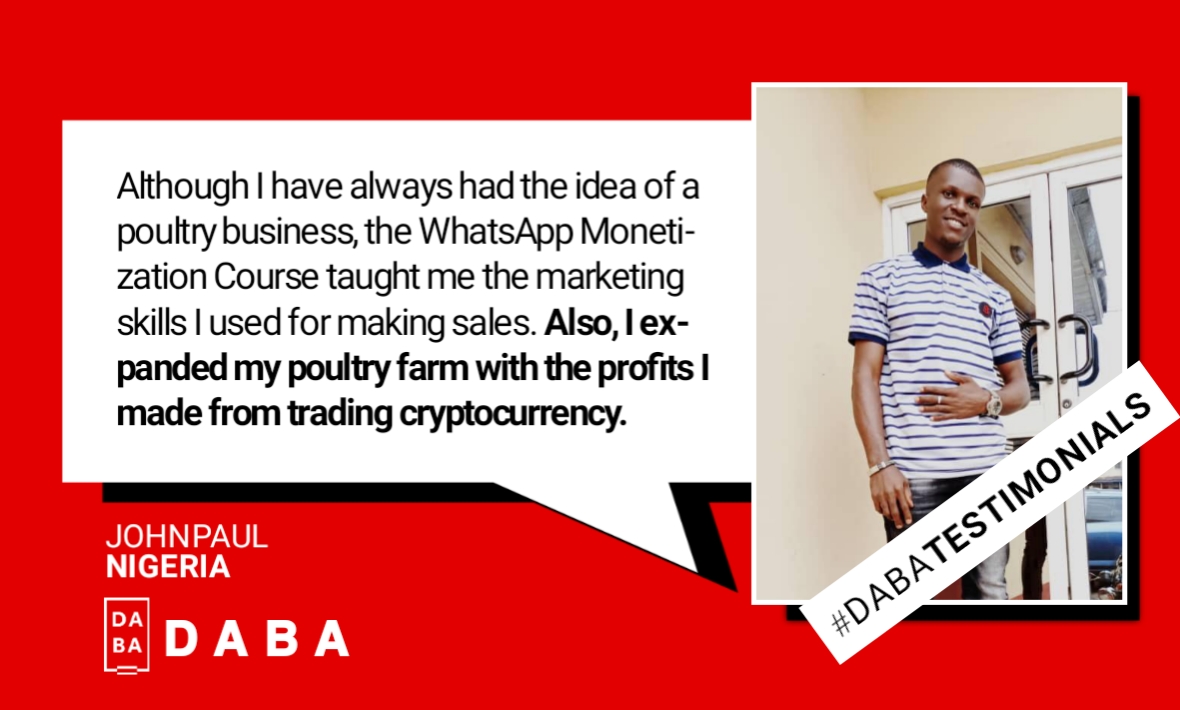 The Story of Smart: How Two DABA Courses Became His Smart Tools For Financial Freedom

The Journey Of A Profitable Trader Begins With A Free Webinar

On May 31st 2020, Johnpaul aka Smart, a 25-year old student of Med. Lab. Science who loves farming, attended the Binance Masterclass free webinar tagged “Becoming A Profitable Trader.” Attending this webinar after its flyer on a friend’s WhatsApp status was a decision that changed Smart’s life for the better.

In that class, Chris Ani showed the participants how to navigate their way through the Binance exchange as beginners. He also introduced DABA’s Trade and Make Money course to those who wanted to know more about crypto trading. Smart did not have enough money to enroll for the course, but he didn’t resign himself to fate, instead he used certain “smart” strategies to achieve his goal.

About TMC 2020 And Seizing Opportunities

First, he borrowed money to enroll for the WhatsApp Monetization Course. According to him, he took the course even though he had no product or service for sale. (Or maybe he did, but didn’t know.) However, he decided to implement what he learnt in the course. He began by organizing a webinar for a small group of people to teach them what he had learnt from the Binance Masterclass.

“My target was just 20 persons who were willing to pay a little amount and learn, because at that time, people were busy with Ponzi and pyramid schemes,” he said.

Next, he designed a flyer promoting himself as a crypto trader who bought and sold every kind of cryptocurrency. Through that flyer, he made 100,000 naira in one month. And this led to his second strategy.

On the last day of The Money Code Conference (TMC) in October, Chris offered almost a 30% discount on the Trade and Make Money course. For Smart, the opportunity he had been waiting for was right before him. He seized it immediately, took the course, and began his journey as a crypto trader.

He bought a coin which was unprofitable, however, the Uniswap airdrop helped mitigate his losses. Like Blessing, Smart was also a beneficiary of the airdrop. He received $1,600 from it, and ploughed a part of this sum into his poultry farm.

Smart had always had the idea of a poultry farm but it took the lessons from the WhatsApp Monetization Course and profits from crypto trading to turn his poultry business into a highly profitable venture.

“Although I had always had the idea of a poultry business, the WhatsApp Monetization Course taught me the marketing skills I used for making sales. To be sincere with you, I thought I could only sell my chickens at the market only; I never knew I could sell from social media. Also, I expanded my poultry farm with the profits I made from trading cryptocurrency,” Smart told the DABA team.

A combination of the profits from cryptocurrency and the marketing strategies from the WhatsApp Monetization Course has morphed Smart from a poultry businessman who made a revenue of 100,000 naira every three months to one who now makes same figure monthly; from one who could only afford 2–4 bags of feed each month, to one who now buys and stores up to 50 bags; from one who sold chickens only at the local market, to one who has become a major supplier of chickens to hotels in Nnewi.

His farm houses over 300 chickens which are divided into smaller groups of 50, and kept in different coops. The chickens are fed and groomed for about two months before they are sold. It is interesting to note that Smart’s poultry business has grown to the point where he no longer sells the chickens in single units, but in bulk of at least 50 units. In a video of his farm, he showed the team about 200 chickens which were already booked for sale. He also told the team that he is looking at getting a land to expand the farm.

“My sales strategy was gotten from the WhatsApp Monetization Course: I ensure that my customers always want more. I do this by making sure that I have chickens for sale every month. I do not want them coming back the next month only to learn that I am out of stock.”

Smart embodies smart ideas, smart strategies, and the patient walk to financial liberation. This is why he advised those who want to make legit money to join DABA.

“Most persons in DABA might not have done what I have done, but the truth is simple: learning is a process. Apply what you learn and see result. Find what you love and apply those strategies. Believe me, it is not instant, but it works.”

#From Daba, With Love

Japa-ing And The 3 Currencies You Need For Financial Freedom

7 Steps To Finding and Fulfilling Your Purpose

10 Types of Crypto Traders in a Red Market