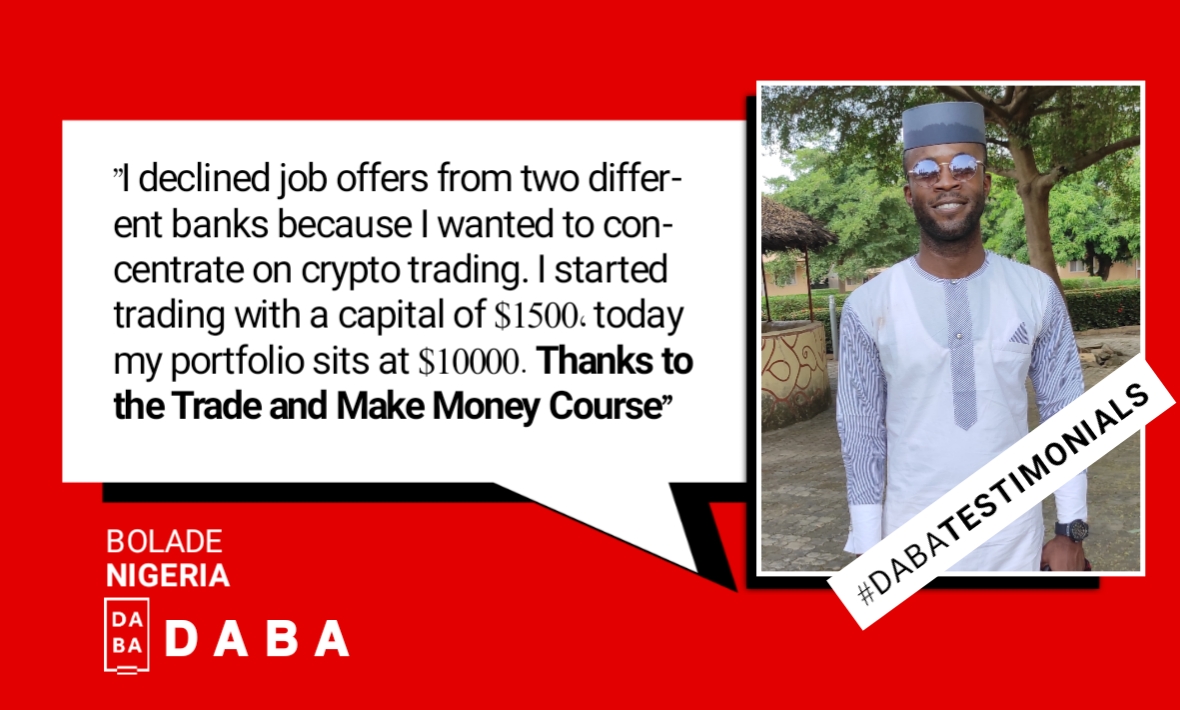 TESTIMONIAL: Bolade Turned Down Two Bank Jobs. Thanks To DABA.

Although we criticise Ponzi schemes, we do not deny or forget that these schemes, especially MMM, were portals that ushered many into the world of cryptocurrency. Bolade was among the many.

It took Bolade three months to implement what he learnt in the Affiliate Marketing course. This was during the lockdown in March 2020. He attributed this delay to the financial burden that came with setting up his affiliate website and other subscription payments. And it took another three months before he got his first affiliate payment of about $150.

He kept at his hustle until the god of airdrops found him worthy in September 2020. He was another beneficiary of the Uniswap airdrop. (Same airdrop that Blessing and Smart benefited from.) With funds from the airdrop, he paid for the Trade and Make Money course.

Bolade did not get carried away with the excitement that came with the free cash.

“I didn’t want to go broke again after getting that money. In one of his online sessions, Chris said, ‘Many who got the UNI airdrop would still go broke because they haven’t positioned themselves properly.’ I related to this because I had previously gotten 2 or 3 big airdrops (though not on the Uniswap level). And the money 'went for vanishing' because I lacked trading experience, trading knowledge, and the right community.”

The Trade and Make Money Course did not just furnish Bolade with trading knowledge, it helped him develop the right mindset and strategy for crypto trading. According to him, “Trading requires a mindset that would enable one to see the blood bath and decide to stand firm. Only fire can mould one into having such a mindset. Practice and using the knowledge acquired with further reading helped me get the needed trading mentality. The crypto communities I belong to helped greatly too.”

Bolade adhered to Chris’s advice and signals. And it has been bliss. He followed Chris’s advice and developed a trading pattern, which is subject to change depending on the condition of the market. He also set weekly and monthly targets (which prevented him from greed and overtrading) and opened different crypto savings accounts.

Bolade, who is currently running his Master’s programme, recalled how he had no job after completing his youth service in 2018. He knew that the crypto space had the potential to be highly rewarding, but he had no capital. “Borrowing wouldn’t make sense,” he said. With unyielding zeal and a supportive mother, he kept searching for legal ways to make money online. Today, that reality has become history. A new reality has emerged—a perpetual one.

Bolade is not bothered about finding a white-collar job. He even turned down job offers from two banks after being successful in the interviews. He gave three reasons for this:

One: “They just wouldn’t give me enough time to concentrate on trading because, in the crypto market, one had to act on some information immediately. I don’t want to miss that.”

Three: “Chris always says, ‘There are seasons to make life-changing gains.’ This is the bull season. I shouldn’t knowingly miss it because I want to enrich someone else’s coffers.”

(This is why banks would continue to fight cryptocurrency. Cryptocurrency is not only giving people control over their finances, it is now ‘stealing’ potential bank staff. LOL! Satoshi Nakomoto, what have you done?)