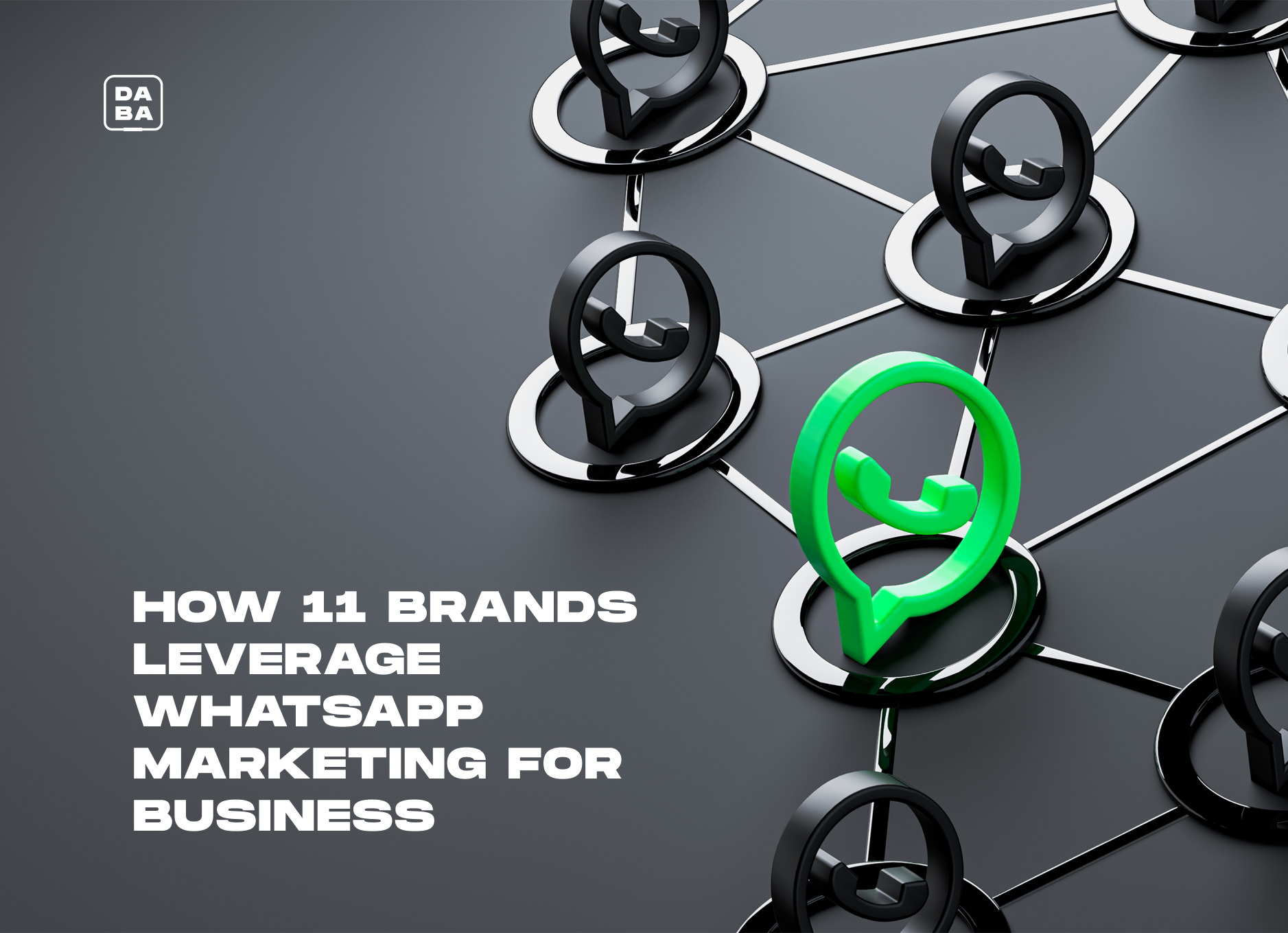 WhatsApp was originally built as a communication tool but has gradually found major applications for marketing purposes. Several businesses have already reaped the benefits of its reach and potential. In this post, we talked about how 10 brands leverage WhatsApp marketing for business. There's a lot to learn from these campaigns, which have been praised as some of the most effective WhatsApp promotions ever created.

Hellmann’s is a popular food brand that deals in condiments, mayonnaise, ketchup, mustard, sauce, and other food products. They had a plan to create awareness on better and more creative dishes with mayonnaise. To execute this, they relied on Whatsapp marketing. At the end of the day, they expected to connect more professional chefs with customers who wanted to learn exciting delicacies with readily available ingredients.

Originally launched in Brazil, this is one of the most well-thought-out WhatsApp marketing initiatives we've seen. Hellmann's built a customized whatscook webpage to get people to sign up. Users submitted their phone numbers and opted into the WhatsApp campaign as a result. Users could email their buddy whenever they felt a craving coming on, and Hellman would react with a supportive text or audio message to help them "fight the crave." They received a message from a human chef over WhatsApp once they have joined up. The chef would instruct them to take a photo of the ingredients they had in their fridge and upload it. Then he would go on to tell them what they could make with the leftover ingredients and Hellmann's.

Absolut Vodka, a Swedish liquor firm, was one of WhatsApp's first success stories. Absolut had a difficult time attracting worldwide audiences when it launched its Absolut Unique Vodka product in 2013, as it was up against other liquor businesses with more years of experience. All the company did was leverage the WhatsApp platform by creating a fake doorman for their new collection launch in 2013. Individuals had to convince the fake doorman (Sven) on Whatsapp to grant them access to win tickets for the event. Rather than creating a story that would appeal to people of all ages, Absolut chose to use WhatsApp's messaging system to gain credibility and exposure among younger people all around the world.

Think a long-form publication can't succeed on an instant-messaging app? Think again. The Financial Times, a subscription-only journal, published two free daily pieces on its WhatsApp Group in late 2019. According to Digiday, sharing content has resulted in more conversions, more brand exposure, and insight into what themes are essential to their potential subscribers than other social platforms. Interestingly, the publication observed that its audience was more engaged with the content and more willing to subscribe than audiences on other online platforms, although it was considerably smaller. People who clicked a Financial Times link on WhatsApp, for example, were 40% more likely to return to the site within three days than those who hit their links on other media. The newspaper also discovered that the amount of traffic it received through WhatsApp was comparable to the amount it gets from a typical Twitter post.

The Tikkie app was developed as a quick solution to help individuals manage their finances. The app helps you send online payment requests to people. This way you can split bills and request for agreed payment. The app developers noticed that splitting the bill or dealing with money transfers was inconvenient and awkward. Tikkie fixed this annoyance issue by providing sticker packs that help you request your debts from people without creating an awkward scene. When Tikkie app users receive a message from the Tikkie app informing them that a sticker pack is available, they are onboarded into the campaign. This WhatsApp marketing strategy helped the company grow faster and attract more users.

Delhi Police formerly ran advertisements in major newspapers and FM stations to raise awareness for its new campaign. The campaign's goal was to make it simple to share photos and videos of any police officers caught operating inappropriately or criminally. Although the notion was appealing, the process following message delivery was cumbersome.

To increase efficiency, they used the WhatsApp platform to reach a greater number of persons and create awareness. This time more people were enlightened about the new policy. The police also established contact lines to enable citizens to send their observations and complaints to the police public relations desk.

DABA is an online educational platform that equips individuals and brands with digital and high-income skills. DABA began in 2017 and started marketing its brand via  WhatsApp officially in 2019; selling various online courses that teach digital skillls such as affiliate marketing and crypto trading. With their outstanding result on WhatsApp, they began the WhatsApp Monetization Course so that individuals can learn the ropes as well. During the COVID-19 outbreak, individuals and business owners took advantage of the sit-at-home order to learn the course. Through the knowledge and implementation of the lessons and strategies given in the course, many made massive sales and built successful businesses online.  Presently, DABA makes up to $70,000 from various WhatsApp groups where they offer their services.

The end-of-year Christmas season is the busiest for the retail industry. While this indicates that businesses have a large number of sales opportunities, it also indicates that competition is fierce. Makro executed a WhatsApp campaign for a giveaway that required users to write a message to Santa during the holiday shopping rush (because, obviously, Santa is on WhatsApp too).

As part of the WhatsApp campaign, users were encouraged to send Santa a message first. They were then given a Makro-made holiday toy gift guide and asked to pick their favourite item from the list. After being picked, they must send another WhatsApp message to inform Makro (or Santa) of their decision. They were entered into a raffle to win various presents and prizes as a result. It's a straightforward WhatsApp campaign that can be simply programmed with WhatsApp bots, and the advantages are numerous. Makro obtained a whole new list of customer connections as a result, which they were able to utilize to sell some of their other services.

Consider how Unilever, a global consumer products firm, used innovative WhatsApp marketing to promote their new line of washing powder and liquid. By posting hundreds of posters throughout the city of Sao Paola, they began their WhatsApp business campaign in Brazil, asking users to contact a WhatsApp number that was listed. People were placed in touch with a WhatsApp chat bot named "MadameBot'' after sending a message. She'd give individuals advice on how to care for their garments and would take advantage of every opportunity to promote Unilever's new products. Customers that connected with Madamebot earned a 50% discount on the new products as well as free shipping at the end of the session. The WhatsApp promotion, according to  Unilever, was supposed to last for about three days, but it was such a hit that they decided to keep it going for another week.

Saffola, an Indian health care company, used WhatsApp to encourage healthier eating habits by discouraging participants in a WhatsApp marketing campaign from reaching for a snack. It was part of a larger commercial campaign for a soon-to-be-released active slimming product. Users signed up for "Beat the Crave" by providing their WhatsApp number on their website. This gave them access to a "digital audio friend," as the brand called it. Like a wonderful friend, this companion kept users away from harmful foods. Users could WhatsApp their buddy whenever they felt a craving coming on, and the buddy would react with a supportive text or audio message to help them "fight the crave."

Since 2015, Adidas had used WhatsApp to answer product questions and market new products to potential customers. They ran a campaign that included live chats as well as influencer marketing. Adidas offered to help recreational sports players "rent" a professional athlete — or "predator" — for one of their forthcoming games in 2019, after learning that athletic teams utilized WhatsApp to transmit team-wide conversations or announcements.  Adidas momentarily launched a WhatsApp Group to share that they intended to "hire" a professional athlete to help one uncoordinated leisure sports team win a single game. Recreational athletes and coaches were then invited to write WhatsApp messages describing their sport, their next game, and why they needed to borrow a professional athlete to win. Adidas sent a direct communication to the winning recreational athlete a few days later. After that, the "pred" came up at the recreational game dressed in Adidas gear.

Yoox made $80,000 in sales using WhatsApp. They were able to use WhatsApp to reach out directly to their target customers creating a seamless funnel for major sales and patronage. This is a terrific example of a company using WhatsApp to reach out to interested prospects, guide them through the buyer's journey with a highly engaging chat experience, and close transactions without requiring customers to visit a store.

WhatsApp has assisted organizations in nurturing prospects into leads. The success stories of the companies above reveal how the marketing on the platform grew their business. Each success story demonstrates how interactive and highly tailored mobile messaging approaches may benefit marketing.