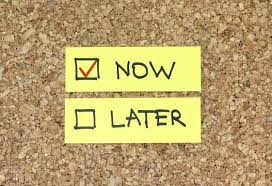 Go Do It Now, Stop Procrastinating

What is the difference between success and failure?

The answer can be found in OG Mandino’s The Greatest Salesman in the World. Mandino writes:

One of these bad habits is procrastination — not taking action immediately.

So many people in the world think about things that they don’t do. They want to do it but never get it done. It’s hard for them to bring something from thought to action.

Do you have great ideas, goals, or visions?

A trap you’re likely to fall into is the trap of overthinking these ideas, goals, and visions. The more you think, the more you procrastinate. The truth is you are not going to bring them to life by just thinking but by taking immediate action. This means you have to start from the simplest thing you can do.

To stop a habit, you have to understand why you engage in it. So find out why you procrastinate. Reasons why you may procrastinate include laziness, lack of energy, lack of motivation, lack of perseverance, inability to stay focused for long, fear of failure, abstract goals, indecisiveness, feeling overwhelmed, anxiety, fear of negative feedback from others, etc.

Whatever reason you may have, there's always a solution.

The only time to act is now!

Climb over the obstacles and act.

Don't put off till tomorrow what you can do today.