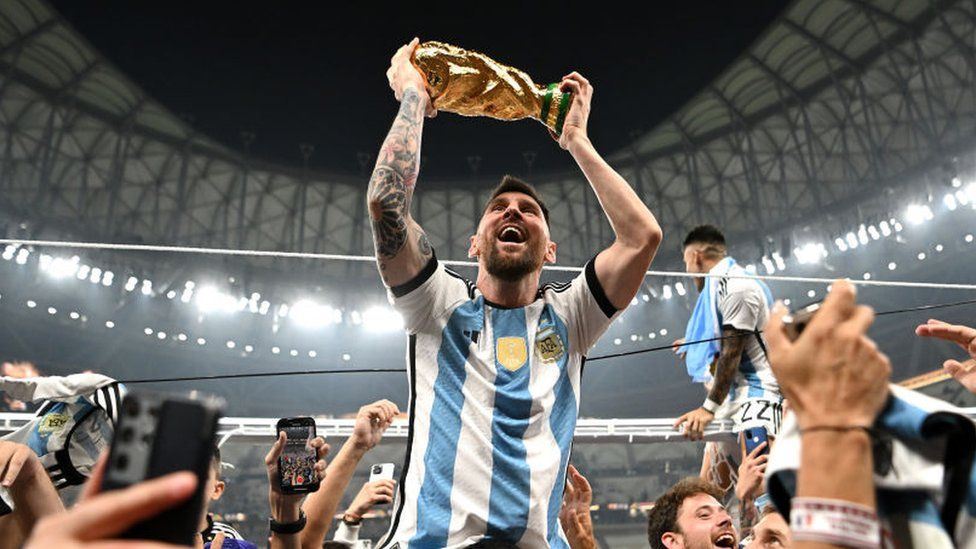 The year was 2005. The year of the U-20 FIFA World Cup. That was the first time we heard the name: Messi. The name bearer was an 18-year-old dressed in a number “18” Argentina jersey that alluded to his age. Messi blazed through the field in this jersey that looked baggy on his small frame. He terrorized defenses and terrified goalkeepers. Although we acknowledged his prowess, we were not drawn to him. We were obligated to support our own Mikel, his closest rival in the tournament. However, the young Argentine would go on to score two spot kicks in the final, leading his teammates to a 2-1 victory over Nigeria. He would even clinch the Golden Boot and Golden Ball awards.

Patriotism made us question his Golden Ball award. Mikel was the best performing player in our opinion. We pointed fingers at FIFA, accusing them of ojoro. Then we earnestly desired Mikel to prove FIFA wrong and show the world that he could step into the big shoes of JJ Okocha. Chelsea would later sign Mikel after jostling with Manchester United for the Nigerian midfielder. Rosario-born Messi, on the other hand, would return to his club Barcelona, where he was the youngest official player and goal scorer in Spain's highest football division, La Liga.

19: And The World Paid Attention

While a majority of his U-20 World Cup counterparts faded into oblivion, Messi displayed strength and versatility as he tore through defenses with lightning speed. In March 2007, he captured the eyes and hearts of the world in an El Clasico. While the game might have ended in a 3-all stalemate, Messi sent a message to the world that day. The match featured stars like Ronaldinho, Deco, and Eto’o, yet it was 19-year-old Messi who scored a hat-trick wearing a “19” jersey. His ball control, fluid dribbles, and mesmerizing goals scribbled these words on the annals of football: This is the emergence of a legend.

The jersey number 10 is significant. Tactically, it is often worn by playmakers, attacking midfielders, centre forwards, and second strikers. But beyond tactics, the number is an emblem of football mastery and honour. It is a number football fans associate with legends. Pele. Bergkamp. Zidane. Ronaldinho. Maradona. So when Ronaldinho left Barcelona for AC Milan in 2008, the club found it apt for Messi to don their number 10 jersey. It was also around the same period Argentina gave him the number 10 shirt. Same number Maradona—who adored Messi and saw himself in him—wore during his playing days for Argentina.

Maybe “10” was his lucky number, his talisman because with the number at his back, Messi enchanted the world with his incredible talent. A year later, he won his first Ballon d’Or—and won it four times in a row (2009 - 2012). By this time, Ronaldo, his rival, had won it only once. This opened up the GOAT debate. It didn’t help that both players were in the Spanish La Liga playing for the league’s two top clubs: Real Madrid and Barcelona. In his 9 years with Real Madrid, Ronaldo lifted the La Liga trophy twice and won the Champions League four times, bringing his total Champions League win to five. (He had earlier won the title with Manchester United). Messi, on the other hand, won the La Liga trophy ten times with Barcelona and the Champions League four times.

Despite their successes and popularity as the world's top two footballers, international trophies were a mirage for both players. They reached for these trophies and couldn’t clinch any. They kept netting goals for their respective nations that weren't validated by any trophy in their cabinet. It bothered both of them, but we could say Messi was more worried by the situation since he was often at the cusp of being an international champion. Between 2007 and 2016, major international trophies eluded Messi’s Argentina. They came second in the 2007 COPA America, were knocked out in the quarter-finals of the 2010 World Cup, were knocked out in the quarter-finals of 2011 COPA America, were defeated in the 2014 World Cup finals, and were defeated again in the 2016 COPA America final, where Messi missed a spot kick in the penalty shootout. At this point, he gave up.

Many do not know that Messi once retired from international football. The defeat to Chile at the 2016 COPA America final broke him. After the match, he said: “For me, the national team is over. I have done all I can. It hurts not to be a champion.” “ It’s been four finals. I tried. It was the thing I wanted the most, but I couldn’t get it, so I think it’s over.” He said these words from a place of despair, a place of surrendering to the fact that the only major international honour he would have would be his 2008 Olympic gold. He was done with reaching for any international football accolade. But was he really done?

Messi’s long stay at Barcelona was a weapon his naysayers used to taunt him during any GOAT debate. While Ronaldo toured three of the world’s five major leagues (English Premier League, Spanish La Liga, and Italian Serie A) and won titles in each league, Messi stuck with Barcelona for twenty years. His antagonists believed that he would lose his shine if he left the club. They opined that he would retire in the same club where he began his football career. However, in the summer of 2021, Messi punctured their mocking opinions with a move to French side, Paris Saint-Germain.

One would have expected Messi to get PSG’s number 10 shirt. In fact, his friend and teammate, Neymar who had the shirt willingly offered it to him. But Messi said no. He went for the number 30 shirt instead. This was new. Or maybe it wasn’t—because Messi had a sentimental attachment to the number. He wore the jersey number 30 when he debuted for Barcelona.

And just like “10” opened a wave of glory for the Argentine star, “30” did the same—especially on the international scene. He won the COPA America that year, the 2022 Finalissima, and the 2022 FIFA World Cup. A victory many said had ended the GOAT debate.

But Messi’s journey to claiming the highest honour in international football is more of a testament of his determination than it is about him being the ultimate GOAT. Granted, he gave up once, stating he was done with international football. But he had encouragers all around him who told him it was not yet time. The president of Argentina begged him not to retire. Diego Maradona pleaded with him too. But the most touching of pleas was a letter by a schoolteacher asking the football star to be the hero her students deserved.

These pleas buoyed up Messi’s spirit and he returned to the international scene. Today, football fans are also crowning Messi as the god of football just like Christians, in diverse carols around the world, are crowning Christ as the King in the spirit of Christmas.

These fans keep screaming the name, “Messi.” As a matter of fact, a photo gallery showing Messi and his teammates celebrating their victory in the Lusail stadium is currently the most liked photo on Instagram, racking over 67 million likes in 24 hours.

Now we cannot help but wonder if each scream, each song, each newspaper headline, each social media like, each congratulatory message remind Messi of the time he almost gave up.

PS: Does this story also remind you not to give up even though you feel that 2022 is over and you didn’t get all you desired eleven months ago?